What you will find in this newsletter:

As part of the Annual Meeting, the Emerging Leaders Initiative (“ELI”) partnered with A Place Called Home, a non-profit organization, based in Los Angeles, which provides a safe and nurturing environment for disadvantaged youth, to bring an exciting and new philanthropy component to NAMWOLF’s mission.  A Place Called Home serves mostly minority and impoverished youth through a variety of education, arts, wellness, and mentoring programs. Its goals are to help its members stay in school, graduate, and obtain meaningful employment; to improve their social skills and interactions with peers and community members; to reduce their likelihood of engaging in criminal behavior; and to empower them to make a positive impact in their communities.  In the last year, A Place Called Home has served over 60,000 fresh meals, provided over 20,000 hours of counseling, supported 112 students in college with scholarship funding and wraparound services, provided music instruction to 450 students, and gave over away 630,000 essential in-kind items.

After the Annual Meeting, NAMWOLF received a warm thank you letter from A Place Called Home’s Executive Director, Jonathan Zeichner, extending his “sincere gratitude for NAMWOLF’s recent donation.”  ELI also would like to thank the Annual Meeting attendees for their generosity! Be on the lookout for how you can support ELI’s next philanthropic initiative at the upcoming Driving Diversity and Leadership Conference in Fort Lauderdale, Florida in February.

Finally, ELI would like to send a thank you to Daniela Abratt, with Thomas & LoCicero PL, ELI’s Philanthropy Subcommittee Chair, for her efforts coordinating ELI’s inaugural donation drive!

Author: Kathleen (Kathi) Lucchesi regularly advises her clients in connection with all types of employment issues both in and out of the workplace. She works with employers in connection with the hiring, discipline and termination of employees, policy drafting and implementation, claims for wrongful discharge and discrimination, unemployment, FMLA and Wage & Hour violations, and EEOC, DOL, ESC, DOJ, and Title IX investigations.

A Happy New Year Courtesy of the U.S. Department of Labor

It looks like it could be a very Happy New Year for nearly 1.5 million workers come January 1, 2020. On September 25, 2019, the U.S. Department of Labor (“DOL”) released its final overtime rule which calls for a significant – though not as significant as originally proposed under the Obama administration – increase to the minimum salary threshold for overtime eligibility.

Unless specifically exempted, employees covered by the Fair Labor Standards Act (“FLSA”) must be paid for all hours worked in excess of 40 in a single workweek at a rate not less than one and one-half times their regular rate of pay. This rate is referred to as “overtime” pay. Generally, employees paid by the hour are non-exempt or entitled to overtime pay.

Under the FLSA, certain employees are exempted, or excluded, from this overtime pay requirement if they are paid a minimum salary on a salary basis (not hourly) and they perform executive, administrative, or professional duties as the primary duty of their job, or are salespeople or STEM (Science, Technology, Engineering, or Math) employees. Temporary employees, independent contractors, volunteers, and interns also fall under the FLSA with regard to overtime classifications.

Currently, employees paid at least $455 per week, or $23,660 per year, on a salary basis who also meet one of the DOL’s eight job duties tests are exempt from both minimum wage and overtime pay requirements. Beginning January 1, 2020, that standard salary level will go to $684 per week (or $35,568 per year for a full-year worker). For now, the DOL is not making any changes to the job duties tests. So, employees will still need to meet both the new minimum salary threshold and one of the job duties tests in order to be exempt from the FLSA’s overtime pay requirement.

Under the updated final rule, employers may credit non-discretionary bonuses, incentives, and commissions toward an employee’s salary level, as long as those bonuses are paid at least annually. However, that credit has a cap – those bonuses may only account for up to 10% of the employee’s salary. The DOL is also raising the standard salary level for “highly compensated employees” from $100,000 per year to $107,432 per year. The DOL anticipates approximately 1.3 million employees will become eligible for overtime pay under the final overtime rule.

What Does This Mean for Employers?

It’s important to also remember that not all states have the same guidelines for worker classifications – many have their own wage requirements and laws. Employers must comply with both state and federal laws in order to avoid the scrutiny of the DOL.

What Should Employers Do?

Start your New Year’s preparations now because if you’ve got even one employee, this final overtime rule will apply to you. Take the next 3 months to review employee pay and classifications and plan for necessary changes rather than waiting till midnight on December 31st. A good lawyer can help you get ready to ring in the New Year and the new overtime rule.

While we’re on the subject, January 1st is also a great time to make sure your policies and procedures are up-to-date and, more importantly, the policies that you actually follow. Consider it a New Year’s check-up for your HR department or HR-related policies. Well- written, easy to read employee policies go a long way in setting employee expectations and preventing issues that might land your company in front of the EEOC, the DOL, or a jury of twelve. And if that’s not enough motivation, remember – spending the time and money now to update your policies could save you money in the long run.

Employee handbooks aren’t one size fits all nor are they implement-and-forget-kind-of- documents. Employment law is one of the most rapidly changing areas of law, so pull out that employee handbook and make sure that your policies and procedures comply with the most current federal, state, and local laws. 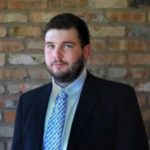 Author: Matt Stokes is a writer, graphic designer, and marketing consultant for Roth Stokes 360. As a ghostwriter, he works closely with attorneys to create engaging articles, blog posts, white papers, proposals, newsletters, and website content consistent with the attorney’s brand.

The question any firm participating in NAMWOLF’s Law Firm Expo must ask itself is what it wants to achieve. Is it looking to spread awareness of its brand far and wide, to have conversations with as many people as possible, or to make more precise, targeted connections? To pull off any of these is a huge challenge in an environment like the Expo, where hundreds of law firms put some of their brightest minds to work addressing those very questions.

The 2019 Expo was held on September 23 at the JW Marriott L.A. Live in Los Angeles. Filling a large ballroom were hundreds of firms and their exhibits, with tables for in-house counsel located just outside the ballroom. Tables were laid out in an alphabetical, serpentine layout that was easy to follow, with maps and NAMWOLF team members readily available to help with navigation.

Nevertheless, the Expo environment can be hectic, especially for the law firm members themselves. Even though the competition with other firms is friendly, it is a competition nonetheless—but that can bring out some of the cleverest ideas for how to stand out. It seems that more firms put an emphasis on experiences over promotional items than in the past. The goal in these cases was to encourage visitors to linger at a table because of what they offered—be it an artificial campfire, a Dia de los Muertos-themed hut, or the chance to operate a remote-control robot.

It being L.A., celebrity glitz and glamor was a common theme. Many firms used movies and TV shows as their motif, with one firm presenting their attorneys as stars and another offering the opportunity to take pictures with A-Listers like Jennifer Lopez and Jamie Foxx, even if they were cardboard cutouts. And while I didn’t know I wanted a picture with Jamie Foxx, it turns out I did, and now the logo of the firm that gave me that opportunity, Schwartz Hannum, is prominently featured in a Polaroid picture of me with Mr. Foxx.

These types of exhibits are great at drawing people in, giving them a laugh, and leaving them with a memento and a permanent positive feeling toward the firm. Then there are firms whose booths make visitors want to stay a while, such as Patrick Law Group’s robot encounter. Controlling a small robot with a remote sounds easy to do, but it is not. Luckily, as visitors struggle to get the robot to obey, PLG’s attorneys get the chance to spend more time getting to know their visitors and talk more about their firm and its work.

Expo table themes should be chosen for a reason—they ideally reinforce either what the firm does or the story the firm wants to tell. In the case of Patrick Law Group’s robot, the message reminds that the firm focuses on the intersection of technology and the law. In the case of Perez Morris, who set up a camp site where visitors could sit around a “fire” and roast marshmallows, the idea was to reflect the firm’s opening of several new offices, blazing out into new frontiers. And for the Los Angeles area-based TLD Law, whose table was decorated for Dia de los Muertos with sugar skulls, papel picado banners, and candles, the booth was a way to celebrate their city’s Mexican heritage and promote the firm’s Day of the Dead-themed afterparty—another example of synergistic marketing, where marketing in one medium (an exhibit) ties into marketing in another (a party).

But even as some firms trended away from promotional give-away items, there was still plenty of great swag to be had. This year, some of the more popular items included charging banks, wireless charging pads, S’well bottles, and travel pillows and blankets. For many, walking the Expo to look for the best swag is the highlight of the entire conference.

As always, the Law Firm Expo offers a unique opportunity for firms to show off their out-of-the-box ideas and one-of-a-kind personalities. Firms usually put many months of work into thinking about their message and how best to memorably deliver it, and this year’s Expo was another illustration of how many NAMWOLF firms are able to execute that very difficult feat.

Interested in joining the Committee? Email Anna Ludwig at aludwig@lkclaw.com for more information.