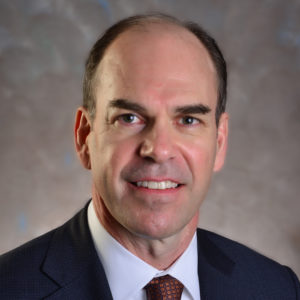 O’Neill was named the company’s senior vice president and general counsel in January 2017. He serves as the top legal advisor to Exelon’s senior management and oversees the company’s legal and corporate governance departments.

O’Neill was formerly senior vice president, Energy and Regulatory Policy and General Counsel at Exelon utility ComEd, where he played a key role in the development and passage of both Illinois’ Energy Infrastructure Modernization Act in 2011 and the Future Energy Jobs Act in 2016. Prior to that, O’Neill held leadership roles within Exelon including serving as senior vice president and Chief Operating Officer of Exelon Transmission Company. O’Neill was responsible for new business development initiatives within Exelon Generation. He oversaw development, construction, and the start-up of Exelon’s 10MW demonstration solar plant on Chicago’s South side. He also managed the formation and initial marketing efforts of Exelon Nuclear Partners, which markets Exelon Nuclear’s operational expertise to international new-build and domestic turnaround customers. He was also the lead executive for the project to submit a construction and operating license (COL) to the U.S Nuclear Regulatory Commission for a dual-unit nuclear power plant in Texas.

Prior to joining Exelon in 2001, O’Neill was a partner with the law firm of Jenner & Block in Chicago.

O’Neill received his Bachelor of Arts degree, with honors, in English Language and Literature from the University of Illinois at Urbana Champaign and his law degree from University of Notre Dame Law School.